He is a scavenger artist.

And while the word, ‘scavenger’ typically brings to mind vultures or other animals that feed on refuse, in the case of the artist, such a title is misleading. What Thomas Dambo does is more akin to upward recycling. He takes what would otherwise be trash, and transforms it into something desirable.

Thomas originates from Denmark, because, of course he does. He has always loved building stuff and began at an early age building treehouses and boxcars from old wood he found around his neighborhood.

After High School Thomas began studying to become a carpenter, although he quickly became bored with the repetitive work. Searching for a different line of creativity, he applied at Kolding School of Designs and was accepted in 2005.

During his early years at the design school, Thomas started to see great potential in all of the stuff that people threw out. He was especially intrigued by all the ply-wood that was thrown away daily by constructing sites etc, and one day when he came across a giant container filled with this, he got the idea for his first major street art project; “Happy City Birds”. Since then Thomas has built more than 3000 birdhouses and spread them in several cities all over the world.

After graduating, Thomas got his own workshop in Copenhagen from where he started his business, while also pursuing his passion as a street artist. He is well known around the world for his large recycle sculptures and installations.

Marvel at the creative world of Thomas Dambo… 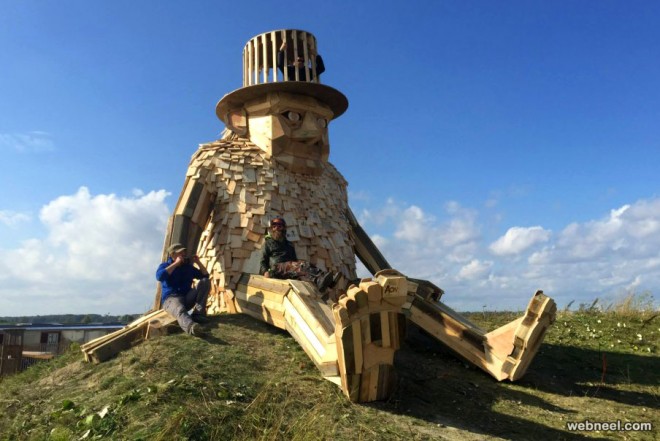 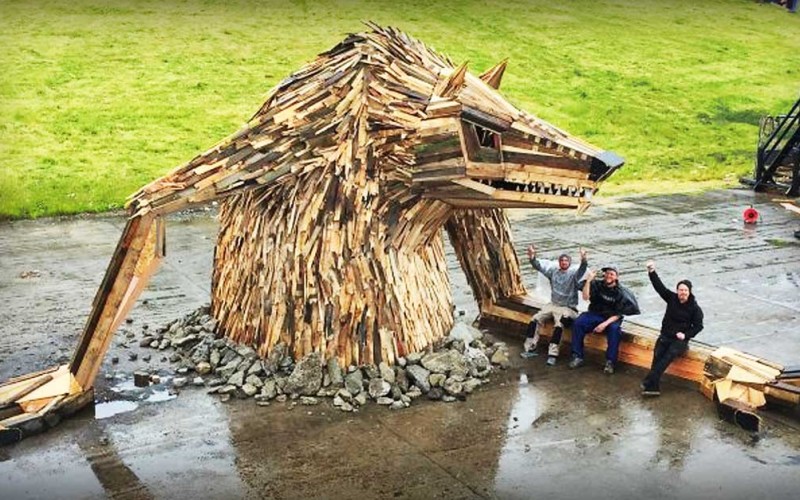 Aside from his massive creature street installations, Thomas has won the admiration of art connoisseur and bird lovers alike with his ‘Happy City Birds’ project.

Thomas began this particular endeavor many years ago. The idea for Happy City Birds sprung from Thomas being a former graffiti artist, and was looking for a way to do street art in a positive way that everyone can understand. Not everyone understands graffiti, but even Thomas’ grandmother understood the purpose of birdhouses.

As all of Thomas Dambos projects all of the birdhouses are made from recycled materials and scrapwood. Most of the paint even comes from Danish paint company Dyrup who has donated a truckload of wrongfully toned paint to Thomas.

Since 2006 Thomas has made and put up more than 3500 birdhouses in different shapes and colors all over the world. Some he and his crew made themselves, while others were co-created in various workshops, some have been used for making big sculptures and art projects, while others have been spread all over different cities. One of the more clever versions of this project are his ‘camouflage bird houses’.

Life as a city bird can be tough, always watching over your wings for various threats. The camoflage bird house project is all about creating safe, homes for our little friends. The camouflage birdhouses can be found around Copenhagen, and in the small town of Ishøj where Thomas has made 52 houses as an outdoor exhibition for the museum Arken.

If you were so inclined and found yourself in Denmark, this would make a fascinating walking tour… and here is a map of all 52 locations of his camouflage bird houses. And for a closer look at the artist and his process…