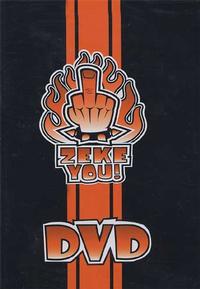 The crystal meth equivalent to punk rock waving the flag of rock and roll. It’s fast and sweaty and loud. It’s Zeke. Now on DVD! Lots of semi-interesting “on the road” type video documentary of the band that is Zeke mixed in with a bunch semi-audible live footage of varying quality (if you know the train wreck that is a Zeke song, you would easily recognize the logistic presented for any kind of camera to accurately pick up that level of punk rock noise). You get a ton of songs though, because Zeke songs tear through you at about 130 mph and are generally finished within one or two of the barking choruses. And then there are the fast songs. Zeke even puts a little apology at the end for the unaltered sound, but maintains that it allows “for the spirit of Zeke to remain true”. And DVDs need extra goodies. You get: The first Zeke video never released to the public for “Highway Star”. A couple of “videos” which are basically a collage of live shots, not synched in any way, to their songs “Twisted” and “Let’s Get Drugs”. And a little mini-documentary and live footage of their day at Seattle’s “Pain in the Grass” festival. The whole thing is a bit raw and minimal, with a “take what we give you and like it” attitude… but hey, that’s pretty fitting for the Zeke brand of musical carnage.