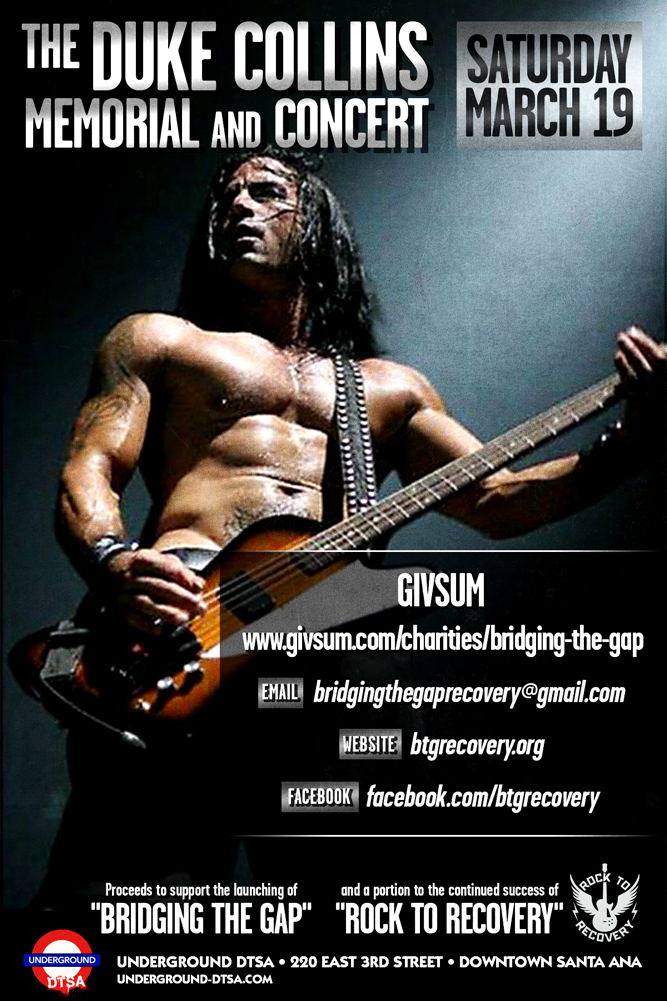 Former Deadlights vocalist Duke Collins was unfortunately taken from the world a year ago and a memorial show was held in his memory, and featured people closest to him. The show became the formal introduction to a new foundation called Bridging the Gap, founded by his mother Sharon “Mama Duke” Gipson.

Show openers Radiodrone, Death Division and Sunflower Dead all opened the show, and despite sound and lighting issues, managed to power through and play impressive sets. While treating their brief set times as a regular show, each band paid their respects to Collins within their respective sets.

Following the openers were an All Star jam consisting of a variety of musicians ranging from Wes Geer (hed pe, Korn), Sonny Mayo (Snot, Amen, Sevendust, hed pe), Bill Hudson (Trans Siberian Orchestra), Michael Lord (Dial 7), Lloyd Grant (played on Metallica’s ‘Hit The Lights’) and many others took part performing on a variety of songs that Collins was a fan of personally. Tunes ranging from David Bowie to Stone Temple Pilots to a memorable version of Metallica’s ‘Seek and Destroy’ (featuring Grant).

The night closed with the Deadlights getting together after a 13 year hiatus with Death Division vocalist Sean de la Torre on vocals and guitars performing songs from their self titled full length album. Running through their core tunes such as “Bitter” and “Amplifier,” the crowd were drawn in immediately and made this moment a memorable one. While the performance did have some rust after inactivity, the energy made up for the time away and made their performance memorable.

Overall the evening was for a great cause and helped keep the memory of Duke Collins alive while launching a new foundation to help those in need of financial help during a tough time. While Mama Duke lost someone special in her life, she will hopefully be able to reach out and help those who are going through similar circumstances.