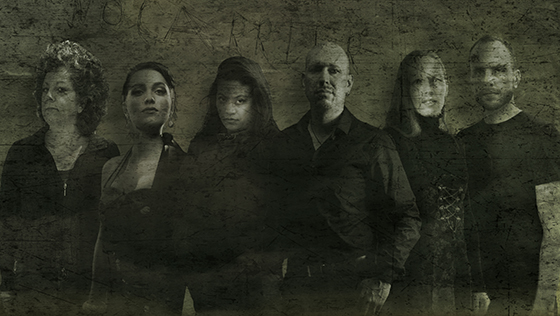 One of the few bands to work a ‘:’ into their band name, this Los Angeles based outfit actually started as a two-piece in Germany in the mid-1990’s.

In 2012, main songwriter Chris Wirsig relocated to California and recruited other musicians and singers from up and down the coast. This collaboration and expansion of no:carrier as a band has coalesced into their fourth album, “Broken Rainbow – Ballads for an Apocalyptic World”. The charm of no:carrier is their ability to work unexpected electronic elements with more traditional and classic instrumentation together for a unique result. The unanticipated angle of no:carrier is the FIVE singers who appear scattered across this release. So it is fair to say, one needs to listen to more than a couple songs to grasp the scope of what is offered on, “Broken Rainbow”. The album opens with the title number, ‘Broken Rainbow’ highlighted by pulsing synths that throb in and out of frequencies the human ear can barely register while lonely violins hang sadly in the air. This sets the tone and displays what the band calls, “Electro Noir Pop”. Essentially, gothic tinged darkness with a heavy electronic element with little regard for traditional song structures, resembling a fleeting thought… a passing idea… a mood captured.

Songs like ‘Little Death’ stumble through purposefully awkward electro-fuzzed-out stomps broken apart by the occasional smoothing out section that helps build tension. There is an intentional uncomfortable execution here… fans of Portishead and Erasure should understand.

‘Your Heroin’ strikes with a stark and exposed vibe, holding a frail vulnerability underneath the sturdy vocals of Chris Wirsig, who is the beating heart of no:carrier and the shaman of its vision. This is the only track on the album that features that male vocal presence. All other songs feature female vocals from four other singers who appear on this release. Perhaps there is a method to his madness, but I’d like to hear what his voice would do mixed with the lush sweep of the feminine presence that dominates this album.

‘Your heroin don’t work no more… the needles are all broken… too much is left unspoken… drowned forevermore.’

‘When The Rain Falls’ features some warped synths backed by traditional classic pianos and a baby soft vocal powdering… making this one of the more faltering melodic numbers, sounding like a record run backwards against a lounge singer’s confession.

Another noteworthy track is their cover of Creedence Clearwater Revival’s ‘Bad Moon Rising’. An almost complete reworking, with just the hollowed out soul of the melody left ghost-like to remind the listener of this track’s origin. Haunting with a death-stare on your attention span.

“Broken Rainbow” delivers 10 tracks of intentional uncertain melodies and insecure executions that creep with dramatic flair and murky impressions. Sweeping and stumbling through the wilderness, echoing with strange sounds mingled with melodies that remind us of… before.

Chris Wirsig comments: “We are truly living in exciting, but also very strange and dangerous times. All over the world there’s a move back towards a more cavemen-like, medieval behavior that I thought we had overcome, more or less. More and more people seem to fall back into an archaic mental state, where dog-eat-dog is the norm and humanity is left to die, while we still make scientific and cultural progress, but – and I know this sounds a bit desolate – mankind doesn’t seem to be fit for the 21st century yet.”

If it moves you, and you’d like to make it part of your world… support the band proper.

no:carrier music can be bought here.