This is Demogoroth Satanum.

They proudly hail from Soweto, South Africa and claim to be the country’s only all black, black metal band.

While rare in the metal genre in general, these fellas are not the first all black black metal band.

That honor goes to Black Death. 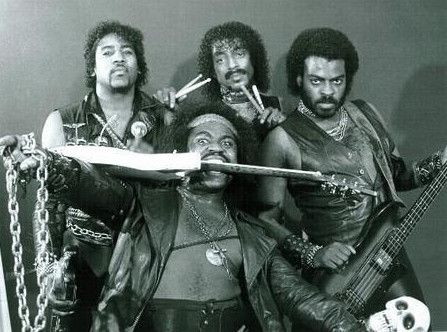 Although to be fair, they were more of a prog Motorhead type of heavy metal. While a group like this would stick out in almost any scene, existing in a South African landscape dominated by euro-cheese synth influenced by African house music is a challenge for these metal loving musicians.

Despite being mislabeled as Satanists and having reservations about breaking into a scene traditionally dominated by whites, the band is becoming successful in their own area with sights on a broader audience. Keep in mind apartheid (the segregation of blacks and whites) was enforced in South Africa up until 1991 and the shadow of that ugly period is still cast upon the land. That is definitely some dark shit to be influenced by and you can be assured the band works such volatile emotions into their black metalness.

Guessing this band is probably off your radar, and knowing ‘black metal’ is a sub-genre of metal that appeals to a finely honed and somewhat acquired taste for this type of sonic assault… the best introduction would be this quick mini-doc produced by UPROXX.

Now I know your curiosity is piqued… remember, this is not for those who think heavy metal equals FiveFingerDeathPunch.

And here is a selection called, “Unholy Triumph” from their only available release, “True Black”.

If you’d like to wade through the entire 35+ minute assault, someone has kindly made that possible for you, lucky bastard.

Digging deeper, Demogoroth Satanum do not exist in a vacuum. There is a bizarre, very metal inspired scene going off in South Africa. And while their numbers may not be legion, their passion surely should inspire any metal-head from any land.

Who are the death metal cowboys of Africa?

*Bonus… so yeah, this exists:

*Double Bonus… this is beyond funny. Black guy calling to audition for a black metal band prank call…