This is classic Quicksand circa 1993. 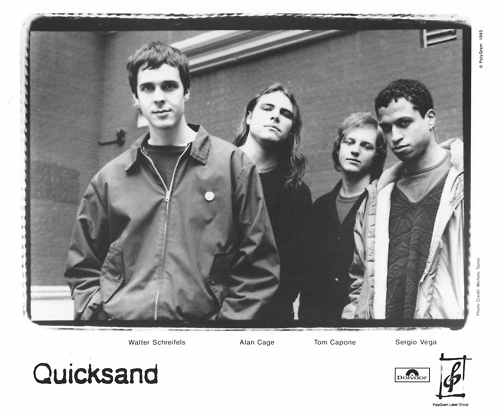 The band was the quintessential 90’s post-hardcore band. Too metal for the indie scene, too indie for the metal scene. Off the radar enough to feel like you were in on some hip musical tip… but finding a Quicksand fan was never that hard, either. Bands like Fugazi and Helmet were also treading these same pre-millennium waters.

They came with a built-in pedigree of cred, with main songwriter/guitarist Walter Schreifels having made a few marks in the New York hardcore scene with bands like Gorilla Biscuits and Youth of Today. The other members of the original Quicksand lineup also came from established bands within the fertile east coast scene.

Unfortunately, touring stresses and internal friction pulled the plug all too soon and saw the band call it quits in October of 1995. The abrupt dis-banding left a budding fan-base and an un-supported final album.

The schism did let guitarist Tom Capone team up with Pete Mengede from Helmet and Pete Hines of Cro-mags and Murphy’s law to form supergroup, “Handsome”. WAY off the radar, but worth your time to find.

In 1998 it seemed, for a moment, that Quicksand was considering a resurrection. A successful tour with the Deftones and warm praises from both critics and fans drove the band back into the studio, but by 1999, old tensions arose and again the band was put on hiatus.

Walter Schreifels made some noticeable noise in his Rival Schools project that released a total of three albums from 2001 – 2013.

An all original Quicksand lineup played in 2012, and a spattering of shows since then hinted at the possibility of new music.

November 10th, 2017 will see that turned into a reality with the release of, “Interiors” on Epitaph Records. A single has been dropped as a teaser, and it is all glorious Quicksand sounding… ‘Illuminant’

‘Thorn in My Side’

And here is some Rival Schools… also worthy…

And some Handsome from guitarist Tom Capone’s post-Quicksand career…