Hailing from New Orleans, they sound as mean as they look.

The core of this band evolved from the formation and destruction of numerous bands before cementing as Crowbar in 1991.

And like most bands that make angry, sludgy, doom laced, heavy ass metal rock, and do it for over 20 years… keeping that vision typically revolves around one core guy and various members that have left, and some that have come back.

Case in point, Todd ‘Sexy T’ Strange (bass) returns to the band for the upcoming release, “The Serpent Only Lies”. 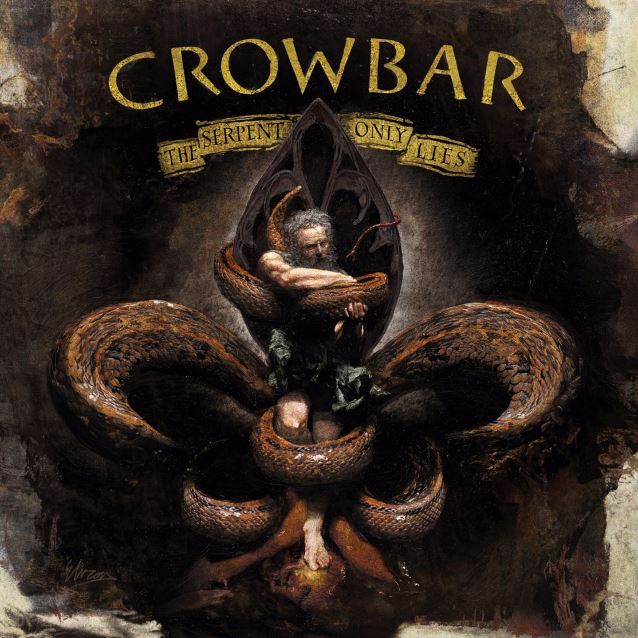 Strange comments on the new record, “I think you’ll find some of the hardcore elements that got replaced by more metal elements have come back. The real doomy stuff is there. Kirk will tell you that he went back and listened to some of the bands that originally influenced Crowbar: Trouble, St. Vitus, Carnivore. And you’re gonna hear all that stuff. To me, some of the riffs are the heaviest riffs ever written. And I’m not just saying that. I might reap the benefits of it, but it’s definitely been well-put-together and well-thought-out. And Kirk’s vocals — he still sounds like he’s been gargling with razor blades, but he’s also gotten a little more melodic in his old age.”

As for founder Kirk Windsteinman who provides guitar, vocals, the and soul of Crowbar… he had this to say about, “The Serpent Only Lies” title track:

“In my opinion, this song is the epitome of the Crowbar sound, it starts out fast and heavy and breaks into a wall of melodic doom before switching gears again. Play it loud!”

I think this guy starred in a Rob Zombie movie…

“The Serpent Only Lies” releases on October 28, 2016 on eOne in North America and SPV overseas. The title track has been dropped upon the masses like a napalm strike of moody punked out hardcore.