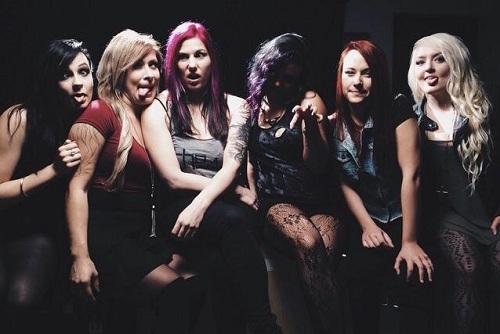 This is Conquer Divide from the outskirts of Detroit, MI.

Let’s state the obvious and we can move on past that… yes… they are all girls.

All girls, who play some kick-ass metal falling somewhere in the post-hardcore emo range. I know… such labels make most people, including the band, cringe with expectations of useless wankery and incessant whining. Forgive the generic attempt at categorization and just understand they do indeed rock.

Formed in 2012 through social media connections and a sheer brutal desire to form a band, the girls found each other sharing a mutual love of metal and performing live.

Conquer Divide features a full frontal tag-team assault of vocals from Kiarely Castillo (singer) and Janel (screamer). The combo metal and melodic guitars come courtesy of Izzy Johnson (she should get some kind of bonus for being called ‘Izzy’) and Kristen Waters. Low-end is handled by Sarah Stonebraker and their drummer is Serbian born Tamara Tadic. Because everyone knows the best female drummers come from the eastern block due to the high concentration of gypsies who are blessed with natural rhythm. And I totally didn’t just make that part up. The band was fortunate to fall onto the radar of Joey Sturgis, a renowned music producer who is responsible for producing many albums in the various ‘core’ genres that have been all the rage with the kids in the last 10-15 years (Asking Alexandra, The Acacia Strain, Of Mice & Men, The Devil Wears Prada).

The band’s self-titled debut dropped in July of 2015 on Artery Records.

Tours with bands like Capture the Crown, Alesana, It Lies Within as well as a stint with the 2015 Summer Slaughter Tour (Arch Enemy, Veil of Maya, Cattle Decapitation) has exposed this upstart band to a wide audience.

Girl bands will always fall under a different scrutiny from metal fans, but the music is what ultimately makes or breaks a group.

And for a band just making their mark, their music is speaking just fine for itself. ‘At War’ was the first single released by Conquer Divide which came out via Artery Records immediately after they were signed.

The follow-up single was, ‘Sink Your Teeth Into This’ which featured guest vocals from Denis Stoff of Asking Alexandria.

If you are still unsure of where these girls are coming from, check this quick bio video that features interviews with the band. Full cred goes to Conquer Divide for coming up the right way. Even though the arc of success will probably have a quicker ascent than a lot of bands due to obvious image advantages, those same aspects will present their own unique barriers of expectations the group will have to overcome by going out and destroying their sets in a live setting.

We will leave you with ‘Self Destruct’… sometimes it might be better to check bands out without the visuals… focus on the music you machismo soaked metal head.