‘Vinyl is making a comeback.’

You’ve heard it passed around by people who like to sound like they know something… or are trying to justify thousands of dollars of vinyl they’ve been hoarding and never listen to.

Well… those people are technically right.

But here’s the thing about stats… they can be heavily manipulated by perspective.

Behold the great vinyl resurgence… with a bit of historical perspective. The ‘sound quality’ debate is over and vinyl undoubtedly wins. So if vinyl is the be-all-end-all for sonic quality, why has the format become so obsolete?

Part of the equation is the gigantic production bottleneck that is stunting the vinyl resurgence.  Currently, most vinyl is produced using 1960s-era, antiquated technology, with processes that are both extremely time-consuming and horrible for the environment.

(a) Mechanically scratching audio grooves into a lacquer foil, followed by an electro-plating process involving lots of chemicals; or

(b) The ‘DMM’ direct-to-metal mastering process, which involves manually scratching the audio directly into a copperplate, followed by electro-plating (and also using a lot of chemicals). 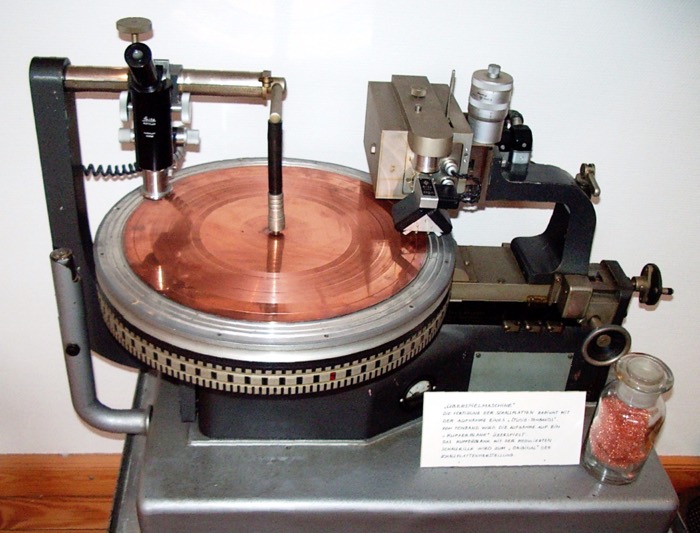 Now, imagine a vinyl record that has 30% more capacity, 30% greater volume, and double the audio fidelity of a typical LP sold today.

The technical specifications for High Definition Vinyl, or ‘HD Vinyl,’ have now been detailed in a European patent filing. This is a concept that could potentially be on the market within three years, according to details shared by Rebeat Digital, the company that filed the patent.

The ‘HD Vinyl’ name is a working title, though the basic idea is this: instead of the manual and time-consuming process currently used for creating vinyl LPs, the ‘HD Vinyl’ process involves 3D-based topographical mapping combined with laser inscription technology to more quickly generate a far superior product.  Not only will the end product be vastly improved, but the time required to produce the LPs will also be radically reduced.

The result is a record that looks like the LPs being sold today, and more importantly, plays like them.   According to the companies involved, the HD Vinyl disc will play on all currently manufactured turntables, though enhanced features will be better realized on upcoming, HD-compatible turntables.

“This is a completely backwards-compatible technology,” said Guenter Loibl, Rebeat CEO.  “It will play on any existing turntable, you don’t need to buy a new system to enjoy the benefits.” “We adjust the distance of the grooves, we correct the radial/tangential errors, and we optimize the frequencies,” Loibl continued.  “You could say we ‘master’ the topographical data, which is a totally different approach.” After that, a ‘pulsed high-energy Femto-laser’ burns the audio directly onto the stamper. Distance between the grooves and depth adjustments happen automatically, with a 90-degree burning angle eliminating possible distortions. All in, Rebeat and Joanneum estimate that stamper-related costs will be reduced by 50 percent, while the time required to produce a new piece of vinyl slashed by 60 percent.

The music industry witnessed another surge in vinyl demand in recent years, with sales booming 29.8% in the United States alone, according to Nielsen Music. That is being followed by an echo of turntable sales: recently, Amazon reported that a $50 Jensen turntable was its best-selling home audio product for the holidays. Even better, the vinyl resurgence could be having a spillover effect into retail, with smaller record shops suddenly resurfacing. Bands are also realizing greater revenues from vinyl: according to financial details surfacing last year, vinyl is actually producing more revenue than ad-supported streaming.