This a section of the Large Hadron Collider.

Not only is it the worlds largest particle accelerator, it is the largest, most complex experimental facility ever built, and the largest single machine in the world. To say it’s ‘big’ doesn’t quite capture the scale…

The LHC’s aim is to allow physicists to test the predictions of different theories of particle physics, high-energy physics and in particular, to further test the properties of the Higgs Boson and the large family of new particles predicted by super-symmetric theories, and other unsolved questions of physics, advancing human understanding of physical laws.

Basically, it’s a bunch of science that takes the smallest particles known to man, then sends them ripping down long tunnels at incredible speeds, smashes them into each other, then tries to record and understand the reactions that happen in a fraction of second.

The idea is, since these are conditions similar to those suspected existed during the creation of the universe, recreating these conditions will offer insights into the construction of reality itself. Or destroy the universe as we know it. Either way, it’s pretty interesting high science.

So of course, the first thought is… what happens if you stuck your head inside the collider when it was firing?

Ask Anatoli Bugorski. He took a particle beam straight to his noodle in 1978… and is still alive today. There are much easier ways to collect some workman’s comp.

Bugorski, a 36-year-old researcher at the Institute for High Energy Physics in Protvino, Russia, was checking a piece of accelerator equipment that had malfunctioned – as had, apparently, the several safety mechanisms. Leaning over the piece of equipment, Bugorski stuck his head in the space through which the beam passes on its way from one part of the accelerator tube to the next and saw a flash brighter than a thousand suns. He felt no pain.

From what we know about radiation, about 500 to 600 rads is enough to kill a person (though we don’t know of anyone else who has been exposed to radiation in the form of a proton beam moving at about the speed of sound). The left side of his face swollen beyond recognition, Bugorski was taken to a clinic in Moscow so that doctors could observe his death over the following two to three weeks. The accident affected half of his face, and all of his sense of fashion.

Over the next few days, skin on the back of his head and on his face just next to his left nostril peeled away to reveal the path the beam had burned through the skin, the skull, and the brain tissue. The inside of his head continued to burn away: all the nerves on the left were gone in two years, paralyzing that side of his face. Still, not only did Bugorski not die, but he remained a normally functioning human being, capable even of continuing in science. For the first dozen years, the only real evidence that something had gone neurologically awry were occasional petit mal seizures; over the last few years Bugorski has also had six grand mals. The dividing line of his life goes down the middle of his face: the right side has aged, while the left froze 19 years ago. When he concentrates, he wrinkles only half his forehead.

And most unfortunate of all… no superpowers.

Bugorski continued to work in science and held the post of coordinator of physics experiments.Because of the Soviet Union’s policy of maintaining secrecy on nuclear power-related issues, Bugorski did not speak about the accident for over a decade.

He continued going to the Moscow radiation clinic twice a year for examinations and to meet with other nuclear-accident victims. He remained a poster boy for Soviet and Russian radiation medicine. In 1996, he applied unsuccessfully for disabled status to receive his free epilepsy medication. Bugorski showed interest in making himself available for study to Western researchers but could not afford to leave Protvino. 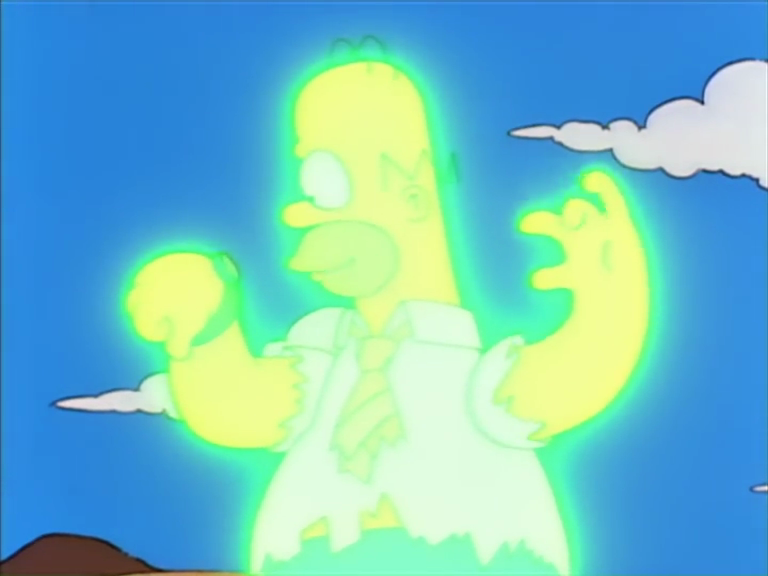 Artist’s depiction of the moment Anatoli Bugorski took a particle accelerator beam to the noggin’.